Woody pictured here outside Mansion House, his official workplace and location of the Canine Division of Miller Commercial property consultants. 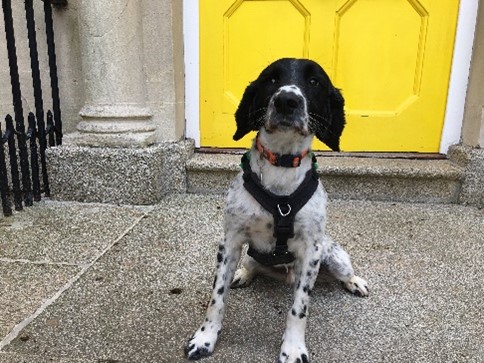 Woody is believed to have been born on a puppy farm in May 2016 probably in Bridgend, South Wales, where he almost certainly lost half his tail. He then spent a short period of time in the Many Tears Animal Rescue Centre until chosen by Miller Commercial Partner Brian Botting on Christmas Day that year. He is described by Miller Commercial colleagues as energetic, enthusiastic and intelligent and is regarded as an integral part of the Company since he started work on 27 December 2016.

The Miller Commercial website now heralds Woody’s elevation to Top Dog within the Company heading up the newly established Canine Division. In his almost 5 years at MC, Woody has gained experience in the Professional Team undertaking a variety of valuations for Bank Lending, Divorce settlements, Probate and for Private Clients as well as assisting on both Lease Renewals and Rent Reviews. He has worked on issues such as improving the format and content of the Valuation Report and has been commended by clients for his confidentiality and “can do” attitude. 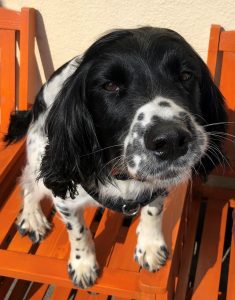 After nearly 2 years in the Professional Team Woody moved onto Property Management and quickly established himself as a reliable member of the Team and confidant to Partner Nick Maffey, who can often be seen in earnest conversation seeking Woody’s input into a tricky problem. Once again, his enthusiasm to tackle any task has come to the fore, particularly where it involves some form of “foodie” reward. During his time in Property Management Woody has helped settle in graduate recruits Zoey Collis who joined in 2018 and Jonny Bright (2019) and is already earmarked to act as liaison with Senior Property Manager Giles Barton who joins us in July this year.

Woody is now looking to the future and will be spending part of his time assisting Partner Brian Botting (known as dad) who will be concentrating on Development & Professional work as well as growing the company. Woody will split his time in the office between helping Brian and overseeing the Canine Division and its Dog & Puppy Recruit Programme which is the first of its kind anywhere in the United Kingdom and probably the World. Miller Commercial recently announced the appointment of Betsy Sawle to the Professional Team, Sam Collins to Business Transfer, Daisy Duckworth within Commercial Agency and puppy trainee accountant Bentley Roberts to the inhouse Accounts Team.

As highlighted Woody has an excellent working relationship with Partner Nick Maffey who heads up the Property Management side of the business and has somewhat of a special relationship (akin to George Bush & Tony Blair) based on mutual trust and respect. He also has a fantastic relationship with the third Partner, Mike Nightingale, but has yet to persuade Mike to allow Max Nightingale to join the Canine Division (watch this space). 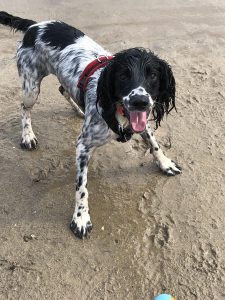 Woody has sometimes been known to help himself to staff lunches particularly where the food has been left at dog height in a bag on the floor and this has led to some (unjust) criticism by a minority of staff of his ability to act as a “team player”. Partner Brian Botting has been known to clear the air by using funds from Woody’s allowance to replace lost lunches. Woody does however earn brownie points from staff by clearing the floors, especially the kitchen, of any dropped morsels and crumbs. Generally considered a happy soul Woody has been known to offer sage counsel to staff during times of trouble but refuses to divulge any information even when faced with biscuits and dog treats.

Recently awarded the Top Dog accolade and in recognition of his sterling work and commitment to Miller Commercial promoted to Head of the Canine Division.

Woody makes no secret of his desire to be leading the company into a bright new future within the next 5 years and has tabled the idea of a Devon Office and potentially a mainland Europe base.